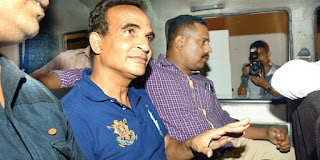 PANAJI: St Cruz MLA Atanasio ‘Babush’ Monserrate was on Thursday arrested for allegedly raping a minor girl. In addition, Monserrate has also been booked for exploiting a trafficked person.
The police also arrested the mother of the victim in connection with the case while the third accused (woman) is said to be absconding.
Referring to the evidence gathered so far, the police claimed that they have established a prime facie case against the accused persons.
An offence was registered on Wednesday night on basis of statements given by the girl in presence of child welfare committee members.
“The Goa police immediately swung into action and started gathering evidence regarding the offence. On the basis of investigation conducted so far in connection with digital forensic circumstantial evidence we have established a prime facie case against the accused,”  SP Karthik Kashyap told media persons at the crime branch office at Ribandar.
Karthik said, “Atanasio ‘Babush’ Monserrate has been arrested and also the second accused – mother of the victim. While the third accused (woman), also a main coconspirator wanted in the particular offence, is absconding as of now. But we will soon arrest the person.”
Atanasio Monserrate on Thursday night was taken for medical examination. He will be kept in the crime branch lockup.
Earlier in the day, Atanasio Monserrate appeared before the crime branch office at around 3.15 pm. His wife and Taleigao MLA Jennifer Monserrate, some CCP councillors and supporters were also present.
Atanasio Monserrate denied the charges levelled against him claiming that the case is politically motivated.
“This complaint is totally false and bogus… this is just to frame me, nothing more than that,”  Atanasio Monserrate said.
Replying to a question, the St Cruz MLA said, “Definitely it has something to do with politics. I am very clean, that’s the reason I am not hiding from anyone nor I have  sought anticipatory bail. I am here to surrender and let them (police) interrogate me.”
He claimed that he was introduced to the family by one of his strong supporters.
“Her parents are voters from my constituency. My strong supporter introduced them to me. They had said that the girl was just loitering…  (you) put her for work, as such I employed her in a shop in Miramar.”
A police team led by Kashyap conducted searches at the farmhouse of Monserrate in Taleigao where the alleged rape took place.
The police team conducted panchanama. The mobile forensic unit was pressed into service, and according to police officials scientific experts obtained evidence in connection with the case.
The farmhouse is located some metres away from the main house of Monserrate in Taleigao.
A sizeable number of police personnel were deployed at the house of Monserrate near the Taleigao roundabout to prevent any law and order situation as since morning St Cruz MLA’s supporters had been gathering at the house.
The girl’s medical examination report is said to be positive.  On Thursday evening her statements have been recorded before a magistrate under Section 164 of CrPC.
Statements of around 10 witnesses have also been taken in  connection with the case.
Reacting to the alleged rape case, Chief Minister Laxmikant Parsekar said the allegations levelled against the St Cruz MLA are of very serious nature.
“I feel that the police need to verify the genuineness, verify the correctness, verify the truth behind these allegations, while examining the case,” he added, stating that let the investigation be completed and the police come to a conclusion.
Parsekar, who holds the home portfolio, further said the police have been asked to carry out in-depth investigation.
“I have been given to understand that the alleged incident did not occur a day or two days ago, but had taken place some weeks earlier, and therefore, it needs to be investigated properly, especially as the accused is a public figure,” he maintained.
Expressing shock at the alleged rape, the local unit of the Aam Aadmi Party has written to the Chief Minister demanding immediate protection and counselling of the complainant, further ensuring that no communication or contact of any kind is allowed between the complainant and the accused.
The letter has  demanded that the related investigation be transferred to an independent court-monitored special investigation team.
The FIR against Atanasio Monserrate for allegedly raping the minor girl had been registered at the Panaji police station and subsequently transferred to the women police station.
Offence of criminal conspiracy and abatement was also registered against the mother of the victim and another woman.
Offences were registered under sections 376 (rape), 370A (exploitation of a trafficked person), 342 (wrongful confinement), 328 (causing hurt by means of poison, etc., with intent to commit an offence) of the IPC, Section 8(2) of the Goa Children Act and sections 3 and 4 of the Protection of Children from Sexual Offences  Act. The accused were also booked under 120-B IPC (criminal conspiracy) and an offence under IPC for abetment.