Addition of Mushtifund School to Cujira complex saw traffic chaos on the first day of the new year; Parents stood on divider blocking traffic; Subway built to ease traffic, but not utilised.
Confusion and chaos prevailed at Cujira complex on the first day of the resumption of the new academic year. Mushtifund school was the latest addition to the cluster of educational institutions in the area. Parents of students from this school, however were seen standing confused outside the gate, on a divider and blocked traffic leading to K B Hedgewar school, located only a few metres ahead.
The passing showers in the morning added to the chaos in the morning. Hedgewar School and Dhempe Higher Secondary School opened their institutions one academic year ago. Mushtifund school began operations from Monday. 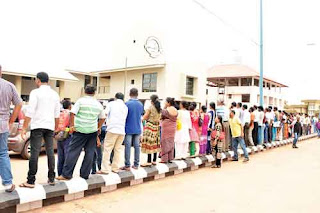 “Parking is a major issued outside Mushtifund. Hedgewar and Dhempe schools have their own independent parking lots, but Mushtifund doesn’t have that facility. The available parking space does not have the facility to accommodate so many vehicles,” said one of the parents.
Choosing to remain anonymous, the parents of students from Mushtifund school said that since it was the first day of the new academic year, confusion and chaos was bound to happen. They said they would wait some days and then see what to do about the situation.
Buses parked out on the road and the parents’ wish to drop their wards right at the gate of the institution from the car posed as the biggest issue at Cujira. The worst sufferers were parents of students from Mushtifund school who, in order to drop off their wards have to cross the Mushtifund school in order to get there.
“Hedgewar school came into existence from last year and since then, the traffic and chaos in the area have been smoothened out. There have been no problems for a while. The problem lies with the additional schools. There is no discipline to park vehicles. Buses were blocking the entire road today,” said Sangam Pankar, a parent of a student from Hedgewar school.
Parents are hoping that the chaos will be looked into and will be reduced in the span of a week. The lack of coordination between schools was clearly evident on the first day of the new term. Both schools started classes at the same time and culminated at the same time as well. This led to even more problems and traffic issues. Both schools ended at 10.35am, being the first day of the new academic year.
The subways managed to ease the traffic from the main road, but a negligible number of parents used the underground passage. “The government is planning an exit route for the road that is crossing through the school complex. Once this project has been completed, the traffic chaos will end,” said Dharmesh Angle, Deputy Superintendent of Police (traffic).
Angle went on to state that the current traffic jam is on account of a single lane which works both, as an entry and an exit route.
Another parent went on record to say, “The purpose of shifting the schools out of the city area was to decongest the city and also so that the schools could function in a smooth manner, as the role of traffic in the city was a huge deterrent to safety. However, even after a year has passed, the situation that we suffered with inside Panjim seems to have transferred over here.”
“The managements of all the schools in the area need to get together and with the help of the traffic police, need to sort out and formulate a plan which will resolve this issue and make it easier on parents who have to come to drop and pick up their child on a daily basis,” Diksha Naik, another parent said.