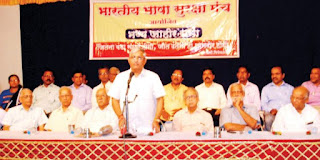 Speaking to this daily on the sidelines of the public meeting organised by BBSM Mormugao block at Vidhyadhiraj Hall, Vasco on Saturday evening, Velingkar said that the BBSM would never support Bharatiya Janata Party (BJP), Congress and Aam Admi Party (AAP) during the forthcoming assembly election as none of the parties showed willingness to fulfil the demand of stopping grants to the English medium schools.
“The BBSM may extend their support to Maharashtrawadi Gomantak Party (MGP) and the independent candidates who are willing to be with the BBSM in its mission,” he said.
He, however, ruled out the possibility of BBSM fielding its candidates during the forthcoming assembly election.
He disclosed that BBSM played a key role in the 2012 assembly election.
“The BBSM not only helped the BJP to reach the magic figure of 21, but interestingly we helped the party to increase the number of votes in almost all the constituencies,” he added.
He informed that the BBSM has started the Matrubhasha Rakshak Abhiyan drive, targeting to register 2 lakh dedicated volunteers, under BBSM, who will rally behind the mandal to achieve the demand and also to support the candidates to get them elected that will be backed by the mandal.
“The BBSM is getting a good response all over the state”, he said adding the BBSM would intensify the agitation from October 2.
Addressing the public meeting, Velingkar came down heavily on the former chief minister and the Defence Minister Manohar Parrikar for considering the illegal demand for grants.
He alleged that the people’s money is being spent by the state government on the English schools.
He said that the BBSM has no objection to the parents enrolling their wards in English medium schools, but we don’t want the government should allocate grants to the English medium schools from the revenue collected in form of tax from the common man.
“BBSM wants the government to de-recognise the English medium schools run by the Diocesan Society of Education and take them over,” he said.
He alleged that the Forum for Rights of Children to Education (FORCE) is de-nationalising the Goans.
“Never try to play with the people and its culture”, he thundered and alleged that the BJP leaders in the state are professional liars.
“The BJP leaders including Parrikar have started making U-turns after 2012 assembly election and till date has continued giving grants to the English medium schools,” he added.
He appealed to the people of Goa to send the BJP leaders home in the forthcoming assembly election for their failure to keep the promise which was given to the BBSM.
Arvind Bhatikar said that Velingkar is fighting for the people of Goa so as to keep the tradition and culture alive.
Naguesh Karmali, in his speech, said that “the agitation launched by the BBSM is not to stop education in English. It has been launched to stop the division of the people”.
“During 2012, the BBSM worked to send Congress leaders home, but in the upcoming election, the BBSM would also play a major role in sending BJP leaders home,” said Karmali.
“The BBSM would support the people (candidates) who would fulfil our demands after the upcoming assembly election”, he said.
The meeting was attended by Swati Kerkar, Ratnakar Lele, Shrikant Dhargalkar, Madhavrao Kamat, Pandurang Nadkarni, Krishnarao Bandokar, Tulsidas Patekar, Arvind Shinde, Ramkrishna Honnavarkar, Pandurang Korgaonkar, Shalaka Kambli, Bhojraj Naik, Pundalik Bhosle, Damodar Naik, Dilip Kajale, Sainath Naik and others.