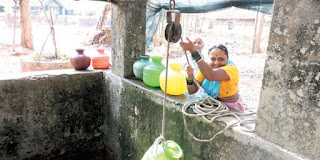 PANAJI: Mercury in the state is rising and so are the water woes in various parts of Chief Minister Laxmikant Parsekar’s constituency of Mandrem in Pernem taluka.
With summer reaching its peak, several locals in Mandrem are complaining of scarcity of water and the problems they are compelled to face due to the erratic supply of water.
“With the rising summer heat, we are also facing water shortage in the village. Water flows from our taps once every two days and it is supplied only for over an hour or so. There are days when there is no water in our taps for several days,” said a local woman Sulochana Pednekar.
She said that the family members are forced to keep all other work aside and wait for water. “It has become our priority and as the summer is progressing, the situation is turning from bad to worse. With a month more to go before it rains, we find it difficult to even imagine the situation in the days to come,” said Pednekar.
Stating that there is immediate need for the authorities to address the problem of the villagers, she hoped that water runs through the taps regularly as the heat wave becomes intense. “More water will be needed as the days advance, as the wells will also go dry by then. Now itself, there is hardly any water left in most of the village wells,” she said.
As water is supplied for a very short duration in various parts of Mandrem at a low pressure, it does not reach several houses located on higher grounds and in the interiors thus affecting those residents badly.
Another local Nandkishore Nhanji said that the erratic tap water supply has been a problem for the villagers in the recent days and that it has worsened of late. “As our wells have gone dry, we are totally dependent on the tap water for all our needs. If we get a good flow of water even for two hours every two days, it will be a big thing for us,” he said adding that the tankers sent to supply water sometimes favour only a selected few.
The wedding season has compounded the problem for some of the villagers, as weddings bring several guests and hence the need for more water. Moreover, many locals in Mandrem rear cattle, who also need water for survival.
Assistant engineer, water supply, Pernem, George said that though there is plenty of raw water available in Pernem taluka, the water treatment plant at Chandel, however, has a capacity of only 15 MLD (million litres per day) and the process for setting up another plant with a capacity of 15 MLD has already begun. “Once the plant starts operating and the capacity doubles, there will be no shortage of water to the entire taluka,” he said. He said that since some areas in Mandrem are located far away from the Chandel water treatment plant, the water pressure reduces due to the long distance because of which the water sometimes does not reach a few houses. “We, however, provide tanker water to the houses that face shortage of water,” he said.
According to some locals, the concerned authorities should supply water every day for atleast a few hours and that too with good pressure, which would solve their difficulties.