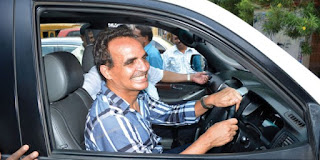 PANAJI: The children’s court on Wednesday granted conditional bail to St Cruz MLA Atanasio ‘Babush’ Monserrate, who had been arrested for allegedly raping a minor girl. Along with Monserrate two other accused – girl’s mother and Rosy Ferros – were released on conditional bail.
The bail was granted, virtually tearing apart the prosecution case wherein acting judge of children’s court Pramod Kamat in the order  observed,  “The investigation so far carried out is tainted, polluted and fragile in nature and as such, there is no justification to allow the applicants (accused) to continue in custody (police)”.
After going through the order and based on the opinion of the directorate of prosecution, the police will decide whether to challenge the court order in the High Court.
The judge observed that the investigating authority failed to disclose a prima facie case against the accused or reasonable grounds to detain them, or any one of them, in the custody.
The recorded statements of various witnesses, who are the employees of Monserrate, in fact, prima facie, belie  the case of the prosecution and supports the claim or say, defense of the accused herein and their “false implication”, the judge said in his  order.
The statements of almost all the witnesses recorded by the prosecution, in fact, bring the victim in bad light, reflecting her character of committing theft of money of accused number 1 (Monserrate) and gold of her mother (accused number 2), thus, prima-facie strengthening the case of the applicants / accused herein, rather than supporting the case of the prosecution, the court order reads. The judge observed that there is no doubt, the offences, as they stand, are very serious, grave, inhuman, barbaric, heinous against women and weaker sections of the society exhibiting extreme depravity, and as such, it was expected from the investigating officer to carry out proper groundwork to dig the facts relating to the crime.
“It is really strange, astonishing and intriguing as to how the investigating authority could not reach or ascertain any one of the persons stated to have been present in the house of the accused number 1 (Monserrate), numbering more than seven, and to record their statements,” the judge said.
“In my considered opinion, their non-examination is an important missing link which cannot be overlooked at this stage. So also, no efforts have been made to ascertain which maid ‘administered’ her the drinks; and as stated the identity of the driver who is stated to have dropped her to the house of Joaquina (victim’s friend), is not established,” Kamat observed.
The judge has observed that there are self-contradictions in the statement of the girl  so also the other witnesses,  demonstrating a background of enmity between the girl and the accused.
“The evidence adduced by the prosecution is not precise in substance, the FIR was not lodged promptly and the material on record does not disclose a prime-facie case of existence of conspiracy between the applicant/accused. The evidence produced on record by the investigating authority is not sufficient and efficient to nail the accused, as the same does not inspire confidence,” the judge said.
Owing to two different birthdates, the police had referred the girl  to the Goa Medical College  and Hospital, Bambolim, for ossification test. The test showed that the victim is 17-18 years.
The judge said the applicants/accused herein therefore, are entitled to the advantage of this marginal error based on the ossification test. In such circumstances it is also doubtful whether the offence under the Protection of Children from Sexual Offences Act, 2012, so also the Goa Children’s Act, 2003 is applicable in the case at hand and more particularly, in the light of the definition of a child under section 2(d) and proviso (d) which defines that child shall mean any person who has not completed 16 years of age.
The girl’s claim that she was unconscious from 6.30 pm to 11.00 am cannot be believed in the light of several phone calls and messages made by her to her friends and vice-versa the next day between 7 am to 9 am, the judge observed.
The medical evidence also does not constitute a strong prima-facie case of sexual intercourse with her as it states that “on physical/genital examination, there is evidence of genital penetration like that of sexual intercourse”, and as such, there is no definite opinion that it was caused by sexual intercourse.
So also, there is no opinion of recent sexual intercourse and no evidence of recently healed genital injury.
The court directed to release Monserrate on furnishing surety of Rs 1 lakh and on executing personal bond of like amount. The court also directed to release the two other  accused on furnishing surety of Rs 25,000 each and on executing personal bond of like amount.
The three accused have been directed to report to investigating officer for seven days.
An offence had been registered against Monserrate on May 4 on the basis of statements given by the girl in presence of child welfare committee members.
Monserrate and girl’s mother were arrested on May 5, while Ferros was arrested on May 7.
The incident of alleged rape was reported in March this year wherein Monserrate wrongfully confined her, administered stupefying substance and had sexual intercourse with her without her consent, the police had said referring to the statement of the victim.
It had also come to light that Rosy had introduced the girl and her mother to Monserrate  and had allegedly brokered  a deal and delivered the girl to St Cruz MLA for sexual exploitation for consideration of Rs 50,00,000.