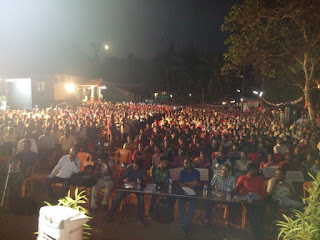 Bicholim: BBSM convener Subhash Velingkar has set a deadline of October 2 to the ministers and MLAs in Goa's cabinet to compel the Goa government to change its decision on continuing grants to English medium schools or otherwise be ready to face the wrath of local language lovers in Goa during forthcoming assembly elections.
Velingkar was speaking as chief orator during a public meeting organized by BBSM's Mayem unit at Gaonkarwada, Mayem, late Saturday evening.
The meeting was attended by others that included Pandurang Nadkarni, Swati Kerkar, Arvind Bhatikar, Fr Mousinho Ataide, Pundalik Nayak, Nagesh Karmali, Bicholim unit president Srikrishna Dhond, Mayem unit president Santosh Sawant, sarpanchas and panchayat members of Mayem panchayat and others.
Velingkar added that this agitation has now not remained as BBSM's agitation but people loving local languages throughout Goa have started supporting the agitation.
Velingkar also added that defence minister Manohar Parrikar had deliberately formed an advisory committee instead of academic authority so that he may continue grants to English-medium primary schools.
Pandurang Nadkarni recalled the study made by UNESCO which also stresses upon education in the mother tongue. He added that if one wants to speak and write better English, then one should learn in the mother tongue at the primary level.