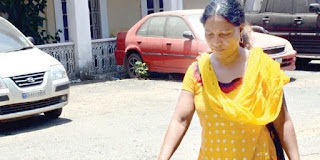 PANAJI: Rosy Feroos, the third accused in the alleged minor girl rape case involving St Cruz MLA Atanasio ‘Babush’ Monserrate, surrendered at the crime branch office at Ribandar on Saturday.
Monserrate and girl’s mother were arrested on Thursday while the police had been on lookout for Rosy.
She appeared before the crime branch office at 12 pm and was accompanied by a counsel.
The police said the 16-year-old girl from Nepal had claimed that her mother and another woman (Rosy), whom the victim called as an aunt, had delivered her to Monserrate for sexual exploitation for consideration of Rs 50,00,000.
Rosy had introduced the girl and her mother to the St Cruz MLA, and had allegedly brokered the ‘deal’, sources said.
The police have recovered a mobile phone from Rosy which the victim had claimed as her own. However, Rosy denied it saying the mobile phone belonged to her and had earlier been given to the girl.
Both the victim and Rosy are neighbours.
Monserrate was arrested on Thursday night for allegedly raping the  minor girl. He has also been booked for exploitation of a trafficked person.
Monserrate was taken to the Goa Medical College and Hospital, Bambolim, for the second time for undergoing some medical tests including that of potency.
The sources said that Monserrate was also taken to the Institute of Psychiatry and Human Behaviour  for psychological tests and are said to be normal.
The offence against the St Cruz MLA was registered on Wednesday night on basis of statements given by the girl in presence of child welfare committee members
The FIR was registered at the Panaji police station but subsequently transferred to the women police station.
The incident of alleged rape was reported in March this year wherein the accused wrongfully confined her, administered stupefying substance and had sexual intercourse with her without her consent, said a police officer referring to the complaint of the 16-year old girl from Nepal.
Offences were registered under sections 376 (rape), 370A (exploitation of a trafficked person), 342 (wrongful confinement), 328 (causing hurt by means of poison, etc., with intent to commit an offence) of the IPC, Section 8(2) of the Goa Children Act and sections 3 and 4 of the Protection of Children from Sexual Offences  Act.