Kejriwal, who is also the Delhi Chief Minister, said that AAP will emulate Delhi model of governance in Goa and help in development of the common man. Kejriwal, who is in the state on a two-day visit, was speaking to mediapersons in Vasco on Tuesday afternoon.  Also present were national AAP secretary Pankaj Gupta, Ashish Khetan, Dinesh Vaghela, Valmiki Naik, Sandesh Telekar, Cyril Fernandes, Old Cross Fishing Canoe Owners Association president Custodio D’Souza and local fishermen community members from Khariwada and other parts of Vasco.
Kejriwal inspected the Khariwada seashore and got acquainted with the problems faced by members of the traditional fishermen community residing along the coast in Vasco.
Charging the BJP and Congress of being corrupt, the Delhi Chief Minister said, “BJP and Congress parties are two sides of the same coin and should never be trusted as they have never ever given clean and non-corrupt governance.” 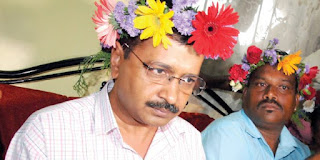 Kejriwal claimed that people are aware about the corrupt practices followed by the two national parties due to which many voters are turning towards AAP which is a party of the common man. He also said that people in Goa have leadership qualities but they do not get opportunities to prove themselves.
Kejriwal further said that AAP has entered Goan politics in order to give stable and non-corrupt government to the people who are “frustrated” with the two national parties. He also alleged that drugs menace in Goa has sprouted only because of rise in corruption and it is the duty of every individual to support AAP in the forthcoming assembly election to uproot corruption.
“AAP is a medicine for corruption and it is a need of the hour to save Goa’s culture,” said Kejriwal. He assured to eradicate corruption and drugs from the state if AAP comes to power in the forthcoming assembly election.
Kejriwal said that AAP will fight to protect the rights of the traditional fishermen all over Goa including Khariwada. He assured the traditional fishermen of Khariwada that they will not be displaced from their houses and will be allowed to continue their traditional fishing activities. “Nobody has right to snatch bread and butter from the traditional fishermen, since fishing is their only source of livelihood,” told Kejriwal and further assured that he will take up their problems with the central government and protect their rights and houses.
The Delhi Chief Minister also claimed that AAP government in Delhi has fulfilled promises made the electorate ahead of assembly election adding, “We have slashed power tariff by 50 per cent and ensured supply of 700 litres of water to every household free of cost. The AAP government has also resolved problems that were being faced by poor people and have protected their shelters.”
Old Cross Fishing Canoe Owners Association president D’Souza said that the BJP and Congress governments have failed miserably to protect the interests of the traditional fishermen. He alleged that both the parties over the years have exploited the traditional fishermen for their political gains. He alleged that the dredging of the navigational channel of Mormugao Harbour will endanger houses of the traditional fishermen. He opined that AAP is making inroads in the state and the traditional fishermen would vote for it in the forthcoming assembly election.