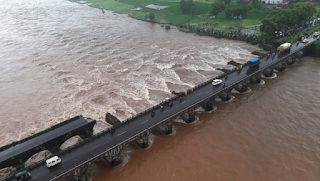 Around 22 people are missing after a British-era bridge across the Savitri River on the Mumbai-Goa highway collapsed late on Tuesday night. Two Mumbai-bound buses are among the dozen or so vehicles that are believed to have fallen into the flooded river. Over 12 hours after the mishap, the bdies of two of the victims have been recovered, officials said.

Officials of the district administration and police rushed to the spot and restored traffic through a new bridge not far away. Three teams of the National Disaster Response Force (NDRF), comprising of about 80 personnel including divers, have been pressed into rescue operations. Heavy rain in the area are slowing the rescue operations down.
Navy and Coast Guard helicopters are being used to spot possible survivors.
Prime Minister Narendra Modi spoke with Maharashtra Chief Minister Devendra Fadnavis and offered his support.
No survivors or vehicles have been found so far. The Savitri River is presently seeing a swell in its water level thanks to heavy monsoonal rain that has lashed the area.
and offered
Traffic on the busy highway, which had been brought to a standstill, has been diverted to a new bridge nearby.
The bridge was about 5 km from the town of Mahad in Maharashtra's Raigad District, about 170 km south of Mumbai. It collapsed around 11:30 pm on Tuesday.